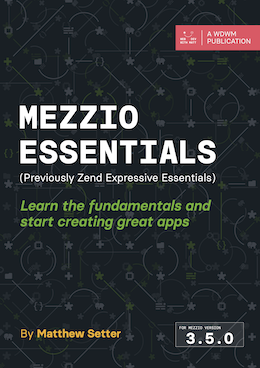 "Mezzio Essentials" is a comprehensive introduction to developing applications with the Mezzio Framework, a micro-framework for PHP. It gets you started right away — with a minimum of background theory and concepts.
Buy it now! or continue reading.

So, What's The Book About?

Most technical books overwhelm you with theory about all the various features and functionality that a given library or tool provides, yet gives you precious little hands-on knowledge of how to use those features to actually build something.

You find yourself thinking: "Well it's nice that I know about all of these things, but how do I actually use them?", and getting frustrated wanting to start building an app, but all you have is a warm and fuzzy feeling and a head full of theory.

This book doesn't do that!

Here's What You Get

What Is a Micro-framework?

First, you’ll find out what a micro-framework is, so that you’re in the right mindset for the rest of the book.

What Is the Mezzio Framework?

Then, you’ll get a rapid overview of Mezzio, specifically it’s core concept, PSR-15 (or Middleware).

After that, you’ll learn about the four core components: Routing, Dependency Injection, Templating, and Error Handling. In this chapter, you’ll learn why Mezzio strikes the right balance between too much and too little functionality.

Create An Application By Hand

With that foundation in place, you’re going to build a Mezzio application — by hand! Why would you do this? So that you know exactly what’s going on under the hood. While doing so, you’ll also learn the most powerful aspect of Mezzio applications - middleware.

Increase the Power of an Application

With knowledge of how to build an application manually and with the skeleton installer, you’ll next learn about how to extend its power by adding support for databases. The Mezzio framework starts off lean, but can be augmented rapidly, as your needs demand. So here, you’ll learn how to add more power when the time comes.

Finally, with all this knowledge at your disposal, you’ll finish up by learning how to compose powerful middleware pipelines, ones that suit exactly the situations that you need, dare I say perfectly! You’ll learn to create powerful, flexible, reusable, and maintainable pipelines that scale with you.

Mezzio Essentials teaches you all of this, so that you stay focused on learning what you need to know to start creating real-world, marketable applications as soon as possible — ones you can charge money for.

"Matt not only shows you how to build a middleware based PHP app, he also explains how it works under the hood As always, understanding how the pieces fit together makes us better problem solvers/devs."

Want to Have a Peek Inside?

Not quite ready to buy your copy of the book, yet? Why not download a preview copy which includes two chapters from the book — completely free? It will give you a glimpse as to what you get in the full book and kick-start your journey with PHP's Mezzio Framework.

Here's what you get:

How to Create an Application Manually

How to Create an Application Using the Skeleton Installer

Make Use of The Code From the Manual Build

How to Increase Your Application’s Power

Who Wrote the Book?

Hi, I'm Matthew Setter - the book's author. I'm a long-time user of the Zend Framework and Zend Expressive, the precursors to the Mezzio framework. I even maintained a blog dedicated to them for some years, called Master Zend Framework.

I've been writing software since 1996, and working with PHP since version 3, before it even had OOP support. In that time, I've worked on all kinds of applications in Australia, the United Kingdom, and Germany.

In this book, I'm excited to share with you just how easy it is to create applications with the Mezzio framework, a micro-framework for PHP; whether small, one-page applications, or enterprise-grade applications. 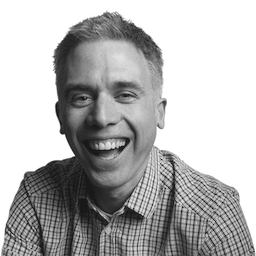 Here's what you get:

Buy Your Copy | $29.00
The tips and tutorials are sent only 1x per/week.
You can unsubscribe at any time. Naturally! Here's the privacy policy.

What version of the Mezzio framework was the book written for?

It's currently valid for version 3.5.0, but is regularly updated to match the most recent release.

Do I get future updates of the book?

Sure do. Once you've purchased a copy of the book, all updates are free.

Can I get an invoice?

Sure can! There'll be one in the email that you receive, after purchasing the book.

I've lost my download link. What do I do?

Email me at [email protected], with your details, and I'll get that fixed up for you.

Can I get student discount?

Sure can! Email me at [email protected], and let's work something out.